Last night I finally got around to watching Interstellar. The wife and kids were off at her folks’ and my friends were busy, so I decided to catch up on some movies I had been meaning to see. I ordered some Thai, sat down, and proceeded to watch one of the better movies I’ve seen in a long time. I had been meaning to do some house hunting stuff on my laptop while I watched, but I was so into the movie that that was all forgotten. I want to watch Interstellar again, which is my personal high-water mark for a movie’s quality. Then I posted on Facebook that I liked it, and got back the comment I had been dreading: in short, “Ugh, Anne Hathaway’s speech.”

If you’re not familiar, around halfway through the movie it’s revealed that Hathaway’s character, Amelia Brand, may be pushing to explore one particular destination over another because her onetime lover was sent to that destination. She gives a speech about love, about how it is a motive force, and then winds up speculating that maybe love exists beyond biology and has an extra-dimensional character to it. A lot of people got worked up about this, because they felt it was too much “new age woo” in their science fiction.

In fact, all it really was, was a bit of new age woo in a sad, lonely, and desperate person on the sharp edge of a potentially futile mission to save humanity. It was a revelation of her character. The story itself never really validated her speculation.

Interstellar talks a lot about love and family and what drives people, especially in desperate circumstances. It does not validate the idea that love is cosmologically significant, just that it’s significant to the actions of people. Which, amazingly, it is! Like fear, hate, greed, anger, etc. The only thing Interstellar says, definitively, about the nature of the cosmos is that a) it still has secrets we have not uncovered and b) we need to leave Earth if we want to uncover them.

Yeah, I wanted to try blogging every day, but that just didn’t work. For, you know, reasons. One of the big ones was that I was actually successful in getting some fiction writing done on my lunch hour. Pretty sweet, right? Right. As is typical for me, I have a dozen things I’d like to be working on simultaneously, but with kids and a day job, that’s kind of tough. I have the time/energy for one thing at a time, though I suppose I could refine the process a little, if I could perfect switching gears on command. I’m also trying to read more, of course, which makes it tricky, too.  I’m still meandering through The Long Earth by Terry Pratchett and Stephen Baxter. It’s been good so far, but like with everything, if I just sink into it, then nothing else gets done, including this.

And yeah, this might not seem as important as, you know, reading, but I find it rather useful.

Life, otherwise, has been life. Work, wife, kids, house hunting, convention planning, theatre planning, and so on. Went to a convention planning party on Saturday, and that was fun as far as it went. But I do wonder if I’m not burning out on it a little. I guess we’ll see how I feel in the fall as we start to ramp up to the convention. I know a lot of people who do convention planning say this, but… I’m wondering if I wouldn’t enjoy just attending for once. It’s been a while since I did that.

Just bought two books for my Nook: The Museum of Innocence by Orhan Pamuk, which I twigged to thanks to a BBC Travel article, and Tripwire by Lee Child, third in his Jack Reacher series. We’ll see how long it takes to actually get to them…

So I haven’t blogged the last two lunch hours because I’ve been busy… writing!  I know, I know, it’s crazy. Nothing much so far, and mostly it was transcribing from an old notebook, but today was actual new, fresh words. And I’ll probably get to more of them as soon as I post this. (Once people stop e-mailing me.)  It’s been nice, getting back to some of the first characters I ever wrote about, albeit slightly changed. I knew I would get back to them eventually, and now seems like the right time.

In other news, I’m already getting into the planning for the next show at the community theatre I’ve joined, and it’s been fun chatting back and forth with the director about some set decoration and prop items, which is what I’m handling for this show. It should be a lot of fun, if a little less intense than actually appearing in the darn thing. Definitely a bit bittersweet there, especially since my friend Shaun (one of the new friends I came out of the last show with) will be on stage in this show too.

With that said, time to get back to writing, I think.

So hey, the story I mentioned yesterday? “Rules of Enchantment” written by me and Tobias Buckell? Yeah, you can read it free, right here. Baen’s E-Books site has it up as a sample chapter for the whole anthology, and I have to say, it is a pretty enticing sample, if I do say so myself. (Of course, I would though, right?) I definitely recommend picking up the whole thing, though. Glen Cook? Myke Cole? Elizabeth Moon? Seanan McGuire? How can you go wrong? 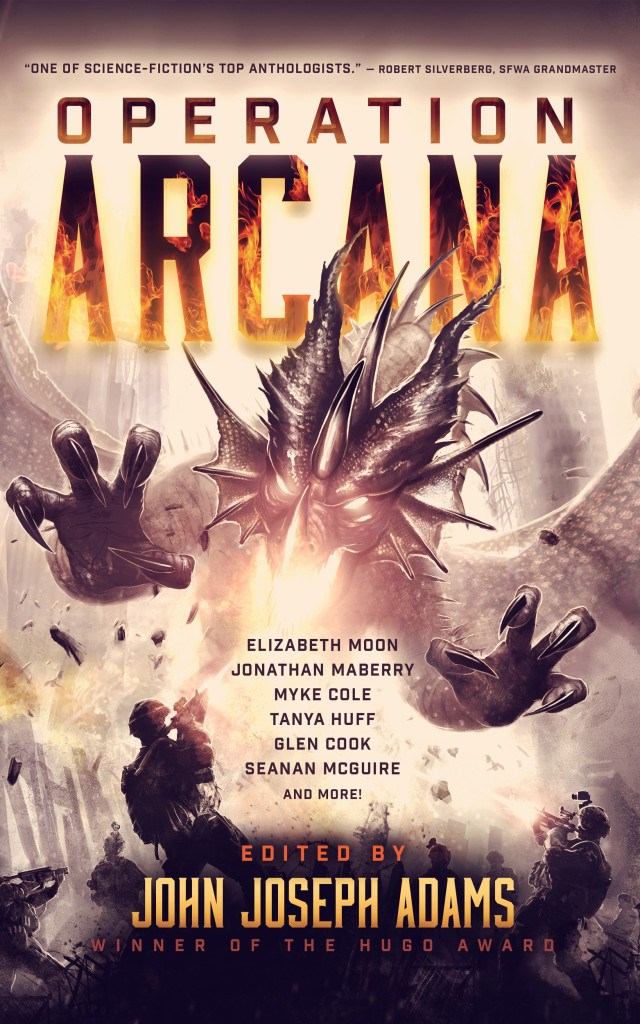 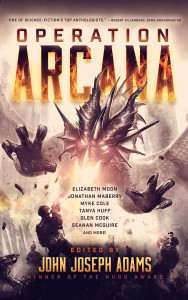 In other “Dave’s Creative Pursuits” news, the story I wrote with my friend Tobias Buckell, “Rules of Enchantment,” is out today. The story is appearing in the John Joseph Adams anthology, Operation Arcana, published by Baen. You can check out your buying options here.

As happens when Tobias and I sit down to write a story, we had a hell of a lot of fun, and once again we leveraged my military experience pretty heavily. (Not that I ever did anything quite like what happens in the story, natch.) This makes the fourth story I’ve written with him, and the second that JJA has bought from us.

At some point, I think there will be a free online version somewhere, but I haven’t heard exactly where that’s going to be. (The last time it was at io9.com, but I don’t know if that’s how this is going again.) So in the meantime, go on, buy it, enjoy it, and tell all your friends!

Had a great opening weekend with the show, and Sunday turned out to be our best performance, in front of our liveliest audience. Hell of a rush, especially when we nailed one particularly troublesome scene. It’s the trouble with fast-paced farce, it’s so damn easy to get a scene derailed, even by something as simple as an actor missing a line by a beat or two. (Says I after my weeks of experience being in a single farce. Weeks, I say!) So yeah, it’s the trouble with this farce anyway, and I can see it translating that way broadly to the genre. But, bottom line, we kicked some ass with it, and it was a heck of a lot of fun.

I was also kind of talked into running for a spot on the Board at dinner after Sunday’s performance. Not that I expect to be elected, though I didn’t expect to be cast in this show, much less offered the lead part. Still, that’s way away in June or July or something. We’ll see if it would be “one thing too much,” but I have ideas on what I can scale back or eliminate if/when it all gets to be too much. Right now, as I’ve said, I’m just glad to be meeting local, creative people and getting involved in something outside of the apartment. I’m not looking to establish any empires, or steer a theatre group to my vision (since, shh, I don’t have much of one), mostly just looking to put down something very much like roots, since we’ll likely be staying in this area for quite some time.

Tomorrow I’m going to try to get back into writing at lunch (beyond the blog) on the regular. I had sacrificed a lot of lunch hours to memorizing lines, but now I probably only need a couple of refreshers to carry me through the next two weekends of performances. We’ll see what I do end up writing. I’ve allegedly got some collaboration projects in the hopper, so we’ll see if those take over my time in the near future, or if I go off noodling on my own.

Last night I was fiddling around, consolidating and rationalizing my family’s digital archives, and stumbled on some old writing. I actually got caught up in reading a couple of the stories I’d written. As fashionable as it is for writers to lambaste their older stuff as rough and unproven… well… I think I liked what I was reading. It wasn’t perfect, by any means, and I’m sure I could do better now (particularly thanks to Mary Robinette Kowal’s short story writing class–highly recommended, btw), but there was something about those stories that I just loved.

Part of it, I’m sure, is that I was very much writing the sort of things I loved to read and I wished there was more of. Particularly, sprawling science fiction intrigue/spy type stories that interconnected on various levels. I’ve been focusing on some fantasy projects recently, and while I really enjoy those two, it’s fairly clear to me after just a half hour perusing old stories where my heart lies.  I may need to get back to those soon.